This is an in-progress personal project inspired by my frustration trying to find all of the information important for my morning commute. Living in Maine in the winter presented a very unpredictable morning routine. Figuring out how many coats I should wear, how much time I’d have to spend digging out my car, or how much additional time my commute would take given traffic was a daily exercise in patience going through the app carousel on my phone. I wished there were some sort of at-a-glance board I could look at and know all pertinent information. Enter The Commuter. 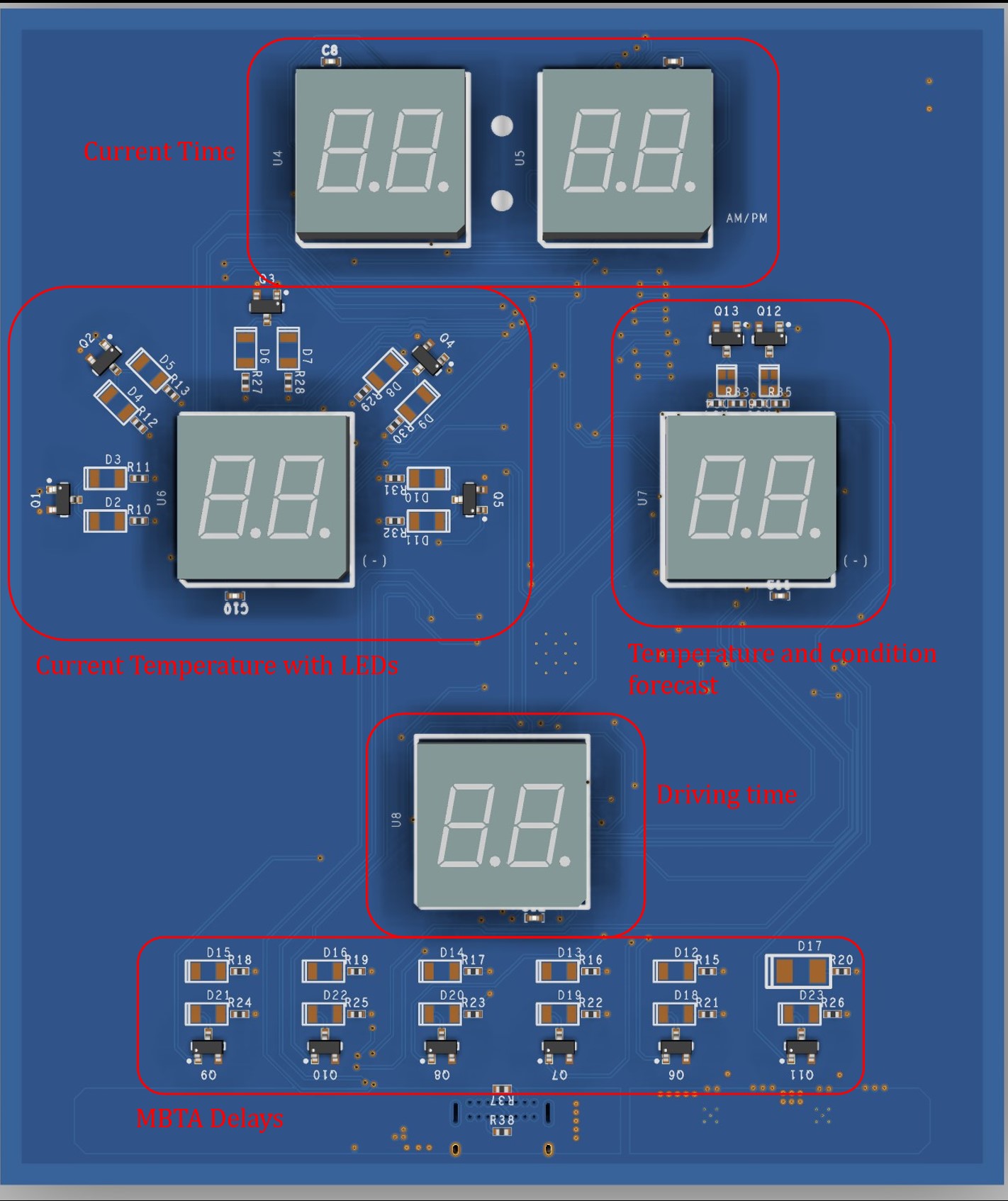 The Commuter board, labeled

These two 7-segment displays show the current time, hour and minute. The furthest right decimal point indicates whether it’s AM or PM. Silk is used to separate hour and minute and label AM/PM

This 7-segment display shows the current temperature. There are 5 pairs of LEDs surrounding it. Each pair lights up in a certain temperature range for easy at-a-glance perception. From left to right:

The 7-segment display flashes back and forth between the HI temperature and the LO temperature for the day. The two LEDs are combination blue and red LEDs. These flash in a pattern that indicate the forecast conditions for the day. The pattern is inspired by the John Hancock light tower in Boston, which flashes in an identical fashion. The image below shows the patterns.

This 7-segment display simply shows the number of minutes the commute from home to work is expected to take.

While the board was inspired by my Maine adventures, I figured I could find this useful when I moved back to Boston. These LEDs show whether or not there is a delay on a line for the Boston trains. The top LED is the color of the line. The bottom LED is an amber LED that illuminates if the line is delayed. From left to right:

Making this all work has proved to be challenging. The schematic is shown below

The microprocessor chosen is the ESP32-WROOM-32D. It has built-in WiFi and Bluetooth controllers and antennas, so it’d be easy to connect to the internet to fetch live data or to a smartphone to possibly edit preferences with an app. A USB-C connector, operating in USB 2.0 mode, is used for programming and power. A USB-UART bridge is used to interface with the ESP and switching regulators are used to provide 3.3V DC power for the logic and 5V DC power for the LEDs. MOSFETs are used as voltage-controlled switches for the LEDs. MAX6957 7-segment display drivers are used to drive the 7-segment displays. They accept a serial input and can daisy chain. This helps with the I/O pin quantity constraint and allow for a single current-limiting resistor for each driver instead of for each of the segments.

The preliminary schematic was completed and I began the board layout as the parts came in for prototyping. 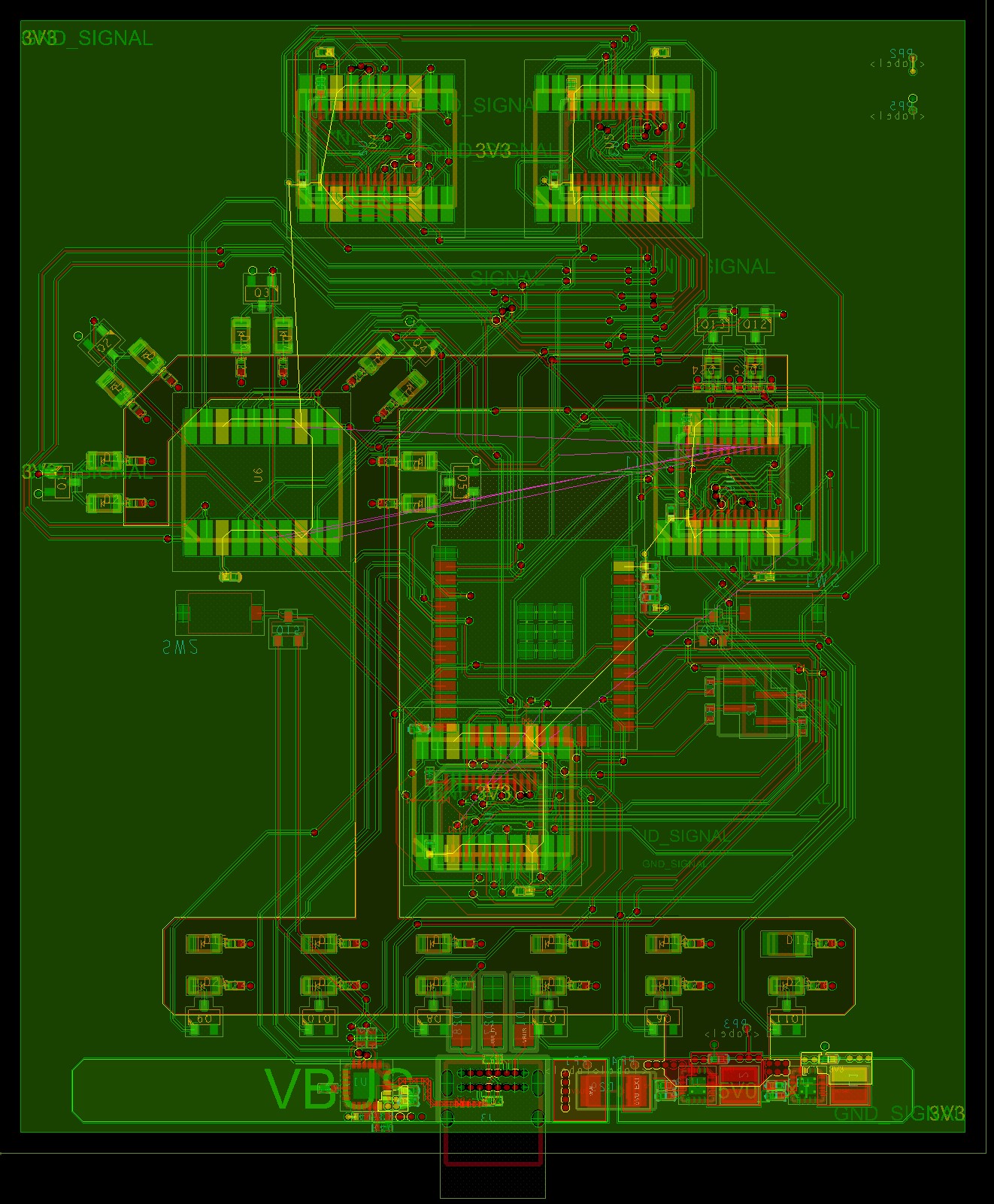 Current layout of The Commuter board

I got a little carried away and did most of the layout before the parts arrived. There are still a few rats to be pulled, but the footprints are finished, the placement is complete, and all critical lines have been routed. I found STEP models for the 7-segment displays and the FETs online, but have yet to get the STEP for the remaining components.

The board has 4 layers: Signal on top and bottom, a power layer, and a ground plane. The power layer is primarily a 3.3 V pour with a 5.0 V shape inlayed for LED power. The power management ICs are all on the bottom of the back of the board, the ESP is in the center of the back, and the display drivers rest on the back behind the displays.

Limiting this board to 4 layers has made it difficult to route all of the lines for the 7-segment displays; you can see the mess below the displays. Adding more layers would be prohibitive for a personal project like this.

The parts for the prototype came in and I started to run into issues. Most of the components are surface mount, and I was having an extremely difficult time soldering them to the Surfboards with my $20 soldering iron and no magnifying glass or microscope. At the same time, my OrCAD license expired, and I had to put the project on hold until I could get my license back and afford better equipment for the project.

This is a clock made from 3 analog voltmeters. The labels are self-explanatory; the left meter shows the ...

*** This was a class project for my Digital Design course that was the culmination of a semester's worth...